I’m Paddy and Always More Gear is (about to be) my music gear blog and video channel. You’re going to find reviews, shootouts, and comparisons of all sorts of guitar gear.

Some of the videos I’m working on for the next few weeks include:

Simply put, Always More Gear is all about the gear that I’m into and figuring out the answers to the questions that I’ve got about them, so it can help you find your tone. How do these high-gain distortions compare? How does that epic reverb compare to this one? What are the differences between my Memory Man Deluxe and Memory Boy Deluxe delays? Can I really play metal with a 10” speaker cone?

I’m working on the first videos right now so it’ll be launching in the next few weeks.

Until then, find out a little more here.

I headed down to the UK Guitar Show at London Olympia this weekend. Here’s my instant reaction/review and a few thoughts on the guitar gear that caught my eye – plus four ideas to make it better!

1. First and foremost, I really enjoyed it. This was my first time there, and it’s a cool way to spend a day! Why? Well, it was great seeing new product ranges from big boys like Fender, PRS, Orange and Marshall, from more boutique companies I rate like Walrus, ThorpyFX and Beetronics, and discovering some innovative guitar and pedal builders that I’ve never seen before. Without fail, the stand reps were friendly and chatty, and it wasn’t so crushed that you couldn’t get your hands on stuff you wanted to try with just a little patience.

The Focusrite clinics and Musician’s Union artist sessions were great too. Pete Cottrell was really informative and properly nice to chat with too, while Misha Mansoor was excellent. I just wish I’d managed to see more clinics! Apart from all the insights those guys shared, their tone and their playing was insane. I need to put in a LOT more practice…

2. There were some surprising absences in the show. No Chapman Guitars, no Victory, no Gibson, for starters – all companies with new gear that I’d love to try out. Obviously those companies all have to make a commercial decision about exhibiting, but from a visitor’s perspective it’s a bit of a shame. If the event is really going to cement itself in the UK guitar scene, surely it needs companies like that in the room?

3. Inevitably, some amazing gear really caught my eye/ear! A few of the things that stood out for me:

• The current Fender line felt predictably great. I tried a couple from the Player series: the Jazzmaster was instantly playable, and sounded big. The Strats felt like Strats should, and I now officially have a gear crush on one of the HSH models. Snappy but punchy – a great mix, and better balance between the humbucking and single-coil positions than on my trusty Blacktop. Want!

• PJD. I’d never seen a PJD axe before, but their acrylic-topped line looks super clean, sleek, and instantly felt great in my hands. I’d love to get some more time with these!

• Orange – as my first bunch of review videos are going to make very clear, I have a bit of an Orange problem – as in, I have way too much of their gear. So, it was cool to see stuff like a new 2×12 vertical cabinet, meaning smaller footprint, plus it’s lighter to carry. Their O-series headphones also sounded very tasty!

• Blackstar – I had a quick listen to the new HT head and it sounded great. Rumour has it that Blackstar will be bringing out MKII versions of the lower-power models for 2019 – as a former HT-20 owner and current HT-5 Metal owner, that got me salivating!

Four ideas to make the UK Guitar Show even better in 2019!

Weirdly enough, Future Publishing – who run the Show – didn’t ask me for input this year, but hey, I’ll assume the email just got lost. But I’m not going to let that put me off. Here, completely unsolicited, are four ideas that might just improve the weekend for 2019. If you run with these, Future, you owe me!

1. Make it louder! Not everywhere all at once – it was actually really good to be able to talk to people, and having headphone set-ups on a lot of stands was smart – but this gear is crying out for some DBs! How about setting up volume-friendly demo rooms, then allocating slots to specific manufacturers to show off their gear at proper volumes?

2. Make the vintage section more interactive. It was great seeing some classic amps and guitars (that Rory Gallagher strat!), but I don’t want to just see them, I want to hear them (and play them, but I can accept that’s probably not happening!) It would be great to get some of those old JTMs or Orange rigs plugged in and roaring.

3. Sell to me! Weirdly (very weirdly), I bought NOTHING. I didn’t spend a penny! It would have been SO easy to take money off me, but, bar one or two shop-style stalls, not many places seemed set up to sell. Now sure, nobody wants to be getting the hard sell all day long, but if this is a consumer rather than trade show, then make it easier for me to consume! Even if orders were being fulfilled by mail (so exhibitors aren’t lugging lots of stock), it would be easy to take my money there and then – 20% off and I’d have been a sucker for a couple of pedals, and maybe more.

4. Make selling social! OK, this is a ‘wild card’ idea – but why not set up a “swap meet” room? Five minutes on eBay or Reverb shows much gear changes hands second hand every week, so how about somewhere where I could buy and sell with like-minded gearheads? Let’s say you get Reverb to partner on it: require buyer and seller to have an account, and that way there’s buyer/seller protection. They could discount the fees to incentivise it. Then maybe you set up a few simple rigs so people can plug things in, check they work. Maybe you cap it at ‘5 items per person’, or something, to keep it manageable. Now, sure, this would need some work – but it could be a very cool way to pick up some new pieces!

Anyway. Overall, it was a very cool day. I’ve come back re-energised about working on my playing, and it’s put more great gear on my shopping list for the next few months. I’ll be back next year!

This was the collection a few months ago. Some lovely gear – some I’ve kept, some I’ve sold, and a few pieces I’m starting to get nostalgia for just looking at this… 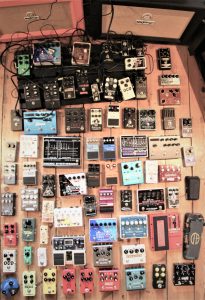